Throughout history there has been an ongoing battle between those who believe in the Freedom of Speech and Freedom of Expression and those who would deny it for their own purposes. How did we get to where we are today? Is freedom of speech really under threat and if so from whom? How do we calibrate the defence of our essential values in an era of rapid technological change and protect both our freedoms and the safety of our citizens?

The Right Honourable Dr Liam Fox MP, Former Secretary of State for International Trade and Former Secretary of State for Defence, speaks at the Adam Smith Institute at 11am on Monday 22nd March to make a pitch for free speech followed by an in-depth interview with journalist Jodie Ginsberg. Together they’ll explore the issues in civil society, law, and the philosophical battle over what we should be able to say, when, and where.

The Rt Hon Dr Liam Fox MP has been Member of Parliament for North Somerset since 1992. In John Major’s Government he served as a Minister at the Foreign & Commonwealth Office and as Government Whip (Lord Commissioner of the Treasury). Under David Cameron he served as Defence Secretary and between July 2016 and July 2019, he served in Prime Minister Theresa May’s Government as Secretary of State for International Trade and President of the Board of Trade. As International Trade Secretary he was tasked with creating the UK’s first Independent Trade Policy for forty years post-Brexit.

Jodie Ginsberg is the Chief Executive of Internews Europe, a media and information development non-governmental organisation based in London. Internews Europe is part of the Internews alliance, which works in more than 80 countries worldwide. Internews ensures access to accurate and trustworthy information through journalism training and digital security support and by providing business advice to media outlets. Internews has more than four decades working in some of the most challenging environments for freedom of expression and a free media. 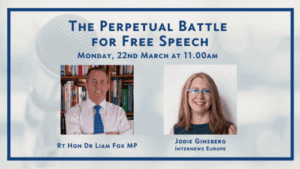